Dedicated key for a name for wayfinding

Continuing the discussion from Multiple delimited names in the name tag:

currently in OSM we have nothing that explicitly says:

In your example, where you were following directions toward a specific signposted city, it sounds like sprinkling destination=* along the itinerary might be more useful than fiddling with the city’s name tags.

But directions very often need to refer to a road by name or number rather than a destination place name. Sometimes the name or number is posted more than prominently enough along the road to go in name=* or ref=*, but not on “trailblazer” signs that would help you find the road in the first place. Some examples:

I’m intrigued by the possibility of an optional “name for wayfinding” key that can accompany the “common name” in name=* when the two diverge and neither name:signed=no nor unsigned_ref=* accurately describes the situation. Similar ideas have come up in the past for a name for addressing. These keys needn’t co-opt name=* any more than a name:left and name:right, but they can add clarity for the data consumers that are prepared for it.

To be sure, such a sign-oriented name would not be immune to the possibility of multiple equally valid values. Pop quiz: is this street in Cincinnati called “Eighth Street East”, “East Eighth Street”, or just “8”? At some point, “map the signs” (and sculpture) is not an entirely flippant retort. 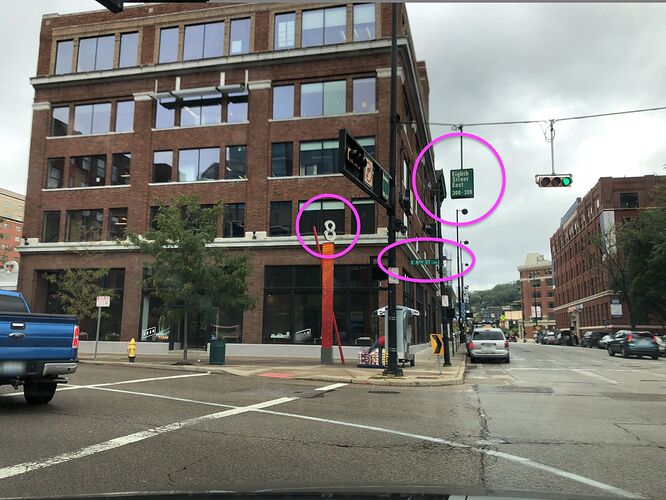