Via an OSM note, I came across the interesting phenomenon that some applications misinterpret direction-dependent node features on road lines (e.g. traffic signal or traffic signs) when these nodes are also shared with area features. In the specific case, the direction of a traffic signal is not only assumed along the road line, but also in the direction of the line of an area:highway area that crosses the traffic signal node (Note and answer, both in German language).

For better understanding, here there is an illustration of the issue: 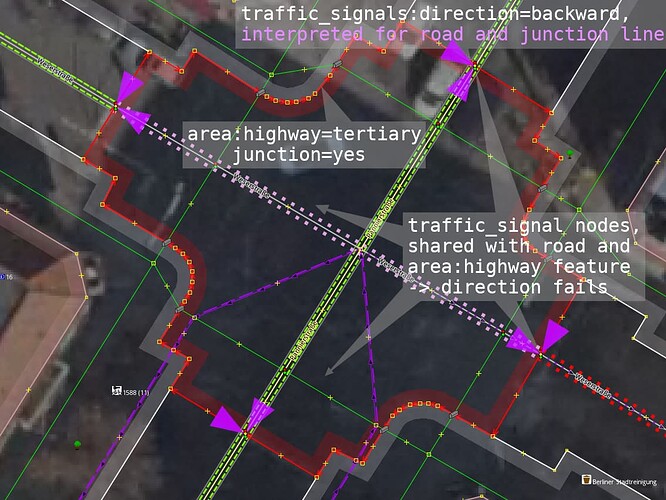 Unlike other area features, like “landuse” (which should not be merged with road lines), I think it is an expected (and correct) behaviour for “area:highway” areas to “meet” the road line on nodes like traffic signals (especially when mapping “junction” areas). To document and raise awareness of this phenomenon, I wanted to open this thread.

(This misinterpretation can also occur in other contexts - here is an issue from the iD-Editor involving city limit signs connected to a landuse area.)

Also, since I’m not familiar with navigation devices or the structures of the providers, I would be grateful if someone could give me a hint if there is a bug tracker or similar for Garmin devices somewhere. Then I could report the specific issue there.