How to match OSM data with OpenData in QGIS?

Short intro: I would like to do a (local) matching of OpenData of my country with already existing OSM data to see how much objects are still missing in OSM.
Disclaimer: There should be no import and I am aware of the Automated Edits and Import guidelines.

It’s about signposts of hiking trails, which my government provides as Open Government Data (OGD). (Basically the data would be compatible for OSM, written consent is also already available, but before I even think about something like import, I want to do a match first to see how much objects are still missing).

I have therefore downloaded and installed QGIS, but never worked with it. Or is there also a way to do this in JOSM?
In the meantime I managed to load the OGD data via shapefile into QGIS (red) and put the OSM objects (green) as another layer on top: 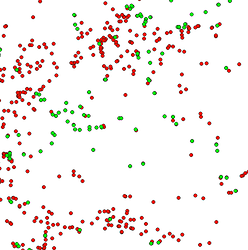 What is the best way to do this?

Since the OGD objects include an elevation and a reference number, which is also on the ground on the signs, a transfer of the values in a second step would be very useful.

(Depending on the number of objects left or missing in OSM, I would either consider an import in the community or consider a MapRoulette challenge, but that’s still up in the air).