I will come to this thread later and do a better reflection of the responses. But in the meantime I will give an idea how, despite actuality have issues, Latin America doesn’t trust foreigner Intervention, not even for aid, and rely on itself: 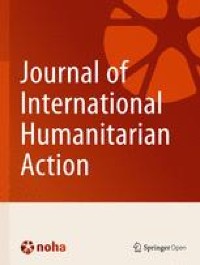 This paper questions the pertinence of the humanitarian aid localization agenda in Latin America, at least in the narrow sense embraced by the 2016 World Humanitarian Summit. Localized support has been the standard practice in the region for decades,...

You from Humanitarian OpenStreetMap Team United States Inc still do not get the big picture where it is getting into. And I say this because the way the paid employees do express themselves and (I assume by inference) likely planning of contingency plans still assumes it is local OSM communities it’s challenging, it’s not: are the governments themselves. Here is not the republic of NGOs; the population assumes emergency response is the role of the government; relevant marathons would mean close contact with emergency response services.

The local governments already are users and experts contributors (just not organized edit). They believe OSM is important. The ground truth over political intent is a reasonable model at international level, maybe better than UN geometries for things changing fast. However, even by total lack of context, you’re both challenging neutral space at OpenStreetMap Foundation and at internal borders of these countries. These countries even have foreigner relations with the United States which is very, very careful to not upset the region. In other words: it is also realistic that even the United States could enforce cutting of funding of your organization.

Anyway, the link is packing A LOT of information very specific to Latin America. The one close to the foundations of what was the hopes for the mapping community was the Disaster Relief 2.0 (2011).

@woodpeck in my culture trying to appear to represent an organization which is not, or stealing someone else’s work, is morally reprehensible because it jeopardizes the hard work of existing communities or is a threat to common goods. Even part of the laws differentiate intentional from unintentional, so in the Hanlon’s razor duality, it is still expected to have strong ways to disencourage the behavior in special if from people expected to be an example for others. That’s why “ambiguity in texts” or lack of disclaimers affiliation which could reveal conflict of interest for others ALWAYS is reprehensible in my culture even when the person believes in her/his/they mind is acting in good faith. Ontologically speaking, this doesn’t apply to individual reality (like person’s gender identity, preferred name, the right to feel upset by something, etc), but shared reality (what affects the others) which what is in the head of a person (intent) is not sufficient.

@nukeador turns out I’m actually okay with changing the person’s name in the title by the role in the organization (“Community Services Associate”), just not sure if it will fit the URL. Also fix the openstreetNap. However, it does not change the fact that in the past it stayed that way for months.